EMBEDDED ADVENTURES: CONNECT THE WORLD AROUND YOU

We love showing off our customers' projects! Embedded Adventurer Steve Spence describes how he made his awesome Arduino based weather station in this video.

We're delighted to have the BME280 based MOD-1022 weather multi-sensor available. 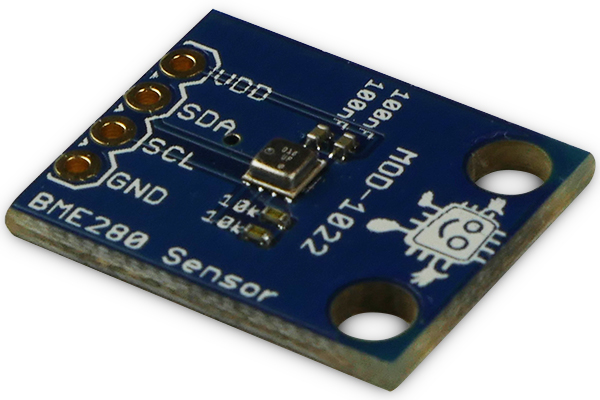 While the picture looks big, it's actually really tiny. In that one chip we have super accurate absolute air pressure (it can measure a 7.5cm difference in altitude, a world-class result), along with temperature (usually required for compensating the pressure measurements) and as a bonus, a pretty solid humidity sensor thrown in as well!

This means with a simple I2C connection (3.3V levels) you can get nice stable measurements and start to make some of your own preductions as to what the weather is going to be like today.

We're really happy with the results so far and have provided full source for using the BME280 with Arudino to get you up and running quickly.

Build your own Weather Station with Embedded Adventures

If you're interested in building your own weather station, there are a lot of great sensors available.

Until now though, it's been hard to connect them all to your Arduino or Rasberry Pi.

So we're delighted to point you to SwitchDoc Labs, run by the ineffible Dr John Schovic.

They have put together some great hardware and software to make use of a variety of weather sensors, including our MOD-1016 Lightning Sensor.

Make your own accurate hygrometer

Let's take some Embedded Adventures components such as a DSP-7S04 4 digit 7 segment display and a MOD-1018 SHT-25 humidity sensor to create and accurate humidity display.

We love LEDs and thought this was very cool!

Read more from one of these interesting news articles:

From Popular Science: Why A Blue LED Is Worth A Nobel Prize; Plus, a little history of making semiconductors glow

Excerpt: "Three scientists have jointly earned the Nobel Prize in physics for their work on blue LEDs, or light-emitting diodes. Why blue in particular? Well, blue was the last -- and most difficult -- advance required to create white LED light. And with white LED light, companies are able to create smartphone and computer screens, as well as light bulbs that last longer and use less electricity than any bulb invented before."

Excerpt: "Nick Holonyak invented the first visible-spectrum LED in 1962, and the technology quickly revolutionized the world; LEDs changed networking, data storage, data transmission, and more; the impact of LEDs can be seen in everything from your smartphone screen to your fiber internet connection to your next car’s headlights. So, when year after year went by without an all-important Nobel nod to LEDs, some in the industry called foul — against Holonyak’s resistance. He says he long ago put aside any lingering hopes that he would win a Nobel, but never imagined that someone else might get it for the technology he himself invented."

Our 3 Question Survey for You, Our Customers

We'd love to hear from you -- our valued customers. We want provide the best service and the best products and for that we need your help!

We hope you'll click here and fill out our simple 3 question survey.

Thank you very much for your feedback!